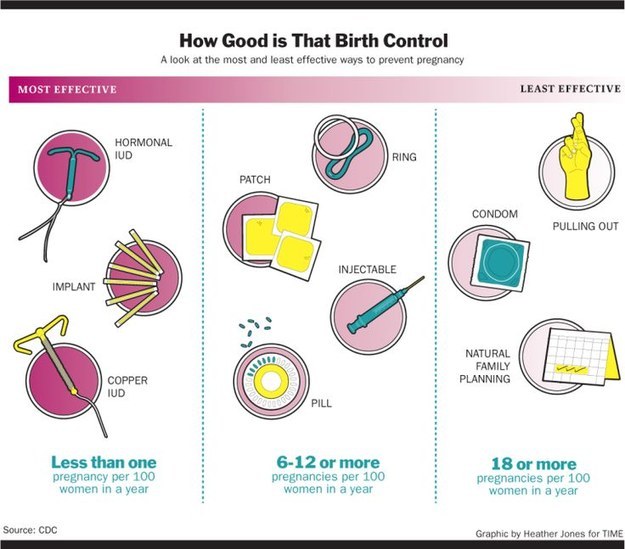 The more control you have over your sexual and reproductive health, the better off you’ll be.

For not getting pregnant.

Implants and IUDs, two long-acting reversible contraception methods, are both over 99% effective at preventing pregnancy. For other types of birth control, “typical use” typically includes occasional mistakes — making them less effective (although better than nothing!). Read more: Why is the most effective form of birth control — the IUD — also the one no one is using?, via Time.com.

THAT SAID, condoms (and other barrier methods) are the only form of birth control that can minimize your risk of contracting or spreading sexually transmitted infections (STIs) during sex. So unless you are in a mutually monogamous relationship, and both you and your partner have been tested for STIs, be sure to use condoms.

For controlling your future. For not contracting or spreading STIs.

Condoms can help minimize your risk of spreading and transmitting STIs, but they don’t provide 100% protection — some infections are spread via skin-to-skin contact, for instance, which means that condoms aren’t fully protective against them.

That said, while not all STIs are curable, they can all be treated and managed with appropriate medical care. The best thing you can do for yourself and your partners is to get tested, know your status, and get the treatment and care you need. And use condoms. They’re not perfect, but they’re definitely better than nothing.

Quick side note: What’s the difference between STIs and STDs? Diseases have noticeable symptoms, while infections don’t necessarily have any (YET). Find out more here. For the sake of inclusiveness, I’ll be referring to any sexually transmittable infection as an STI throughout this article. If that’s confusing to you, just imagine me saying “STD” instead.

For some motivation to get yourself tested. For when you’re confused about who can get pregnant.

For knowing what kind of birth control doctors use. About 40% of women’s healthcare providers use an IUD as birth control, followed by the pill, partner vasectomy, the ring, and then condoms.

For understanding the difference between IUD types. Everyone’s talking about IUDs these days. Here’s what you should know about the varieties available to you. More on this here, and also read about the latest IUD that was recently approved. And one more thing, in case you were wondering: .

For another reason to consider a copper IUD. The copper IUD is a hormone-free way to protect yourself after unprotected sex, and it’s more effective than taking the morning-after pill.

For what else you can do if the condom breaks. From Planned Parenthood’s Tumblr post: “Note: If you’re a trans guy who takes hormones, you should talk with your doctor and see what they recommend when it comes to taking emergency contraception. Unfortunately, right now there isn’t enough research that tells us how hormonal EC will affect you, so your best choice may be the non-hormonal ParaGard IUD.”

For understanding the stakes on a personal level. For understanding the stakes on a societal level. For getting a sense of the bigger picture. Black and hispanic women are more likely than white women to experience unintended pregnancies, abortion, and unplanned births. According to Guttmacher Institute, this is the result of numerous broader social and economic disparities, such as access to healthcare, income, and employment, among others.

For some sobering facts about common STIs.

HPV is the most common STI in the United States. It’s a virus, which means it’s not curable — but for many people, HPV may go away on its own. It’s important for women in their twenties to get annual pap smears to stay on top of their health, and monitor any HPV infections that might come up. For people under 26, there is an HPV vaccine. It protects against the most dangerous strains of the virus that can cause cervical cancer. Read more about HPV here, via the CDC.

Chlamydia is the second-most common sexually transmitted infection in the United States, after HPV. Chlamydia is a bacterial infection, which means it’s curable with antibiotics. It’s important to get tested and know your status, because chlamydia can often come with few or no symptoms, and can lead to infertility in women if left untreated. Read more about chlamydia here, via the CDC. You should know: Many STIs come with minimal or even NO symptoms. So if you’re at risk for STIs, you should make sure to get yourself tested regularly to make sure that you’re still healthy.

For another reminder to know your status.

HIV isn’t curable, but it can be treated and maintained — you need to know your status, though. Protect yourself and your current and future partners: Get tested. More information here.

For EVEN MORE reasons to use contraception, get tested, and get the HPV vaccine if you can. Read more about all this information here.

For knowing what to expect when you get tested.

What to expect when you’re expecting an STI test.

For making the most of your annual trip to the gyno. For putting on a condom the RIGHT way. Because most condom failure is the user’s fault, and totally avoidable!

Infographic via Erika Moen of OhJoySexToy.

For a few more options when it comes to barrier protection. Condoms aren’t the only way to keep yourself and your partner safe. Here are a few other forms of barrier protection that you might be interested in.

For when you need an impromptu dental dam. You can use the barrier method during oral sex, even if all you have is a regular condom on you.

For where NOT to store your condoms. Storing them in any of these places can cause them to break.

For checking your cervical mucus to find out if you’re ovulating. For much of the information you need, all in one place.

Via Greatist. WORTH NOTING: Per the infographic, all the costs listed are before health insurance. Under the Affordable Care Act, anyone with insurance can now get many types of birth control for free, without a copay. More on that here.

42 Thoughts I Had While Getting An IUD

17 Things Pregnant Women Do That Blow You Away