If HANGRY = hungry + angry, would that mean that SLANGRY = sleepy + angry?

You know the rules: Adults should get about 7 or 8 hours of sleep a night. EVERY NIGHT!

But sometimes that just… doesn’t happen. Maybe you’ve got a big exam to study for.

Or maybe you’re all about that party ‘til the breaka-breaka dawn thing.

Or maybe you have a really bad read-the-Internet-all-night-long issue.

Either way, pulling an all-nighter can do some funky and awful stuff to your brain. Like these 10 things:

You’ll have trouble remembering anything you tried to learn during the day (or night).

When you sleep, a part of your brain called the hippocampus replays what you’ve learned while you were awake, Dr. Charles Czeisler, M.D., Ph.D., chairman of the board of the National Sleep Foundation and chief of sleep medicine at Brigham and Women’s Hospital, tells BuzzFeed Life. This helps you encode those things you’ve learned into your long-term memory. No sleep, no long-term memory of those lessons.

And this is why pulling an all-nighter to study for an exam the next day isn’t very smart. “The better strategy would be to read the material during the daytime, and then sleep on it, because then you will actually encode that material into your longterm memory,” Czeisler says.

You’ll stay stuck on any complicated problems you can’t figure out.

Let’s say you’re staying up really late working on a problem set that you just can’t crack. The smart thing would be to go to bed now and try again in the morning. During REM sleep, your brain integrates new memories with other memories you’ve previously learned, Czeisler says. This can often result in insight: Recognizing patterns and solving problems without even consciously thinking about it. If you pull an all-nighter, you miss out on that sweet sweet subconscious insight.

Your circadian rhythm will be thrown off, making you feel like absolute garbage.

Every cell in your body contains its own circadian clock, and your hypothalamus acts as a master clock that keeps them all running in sync, Dr. Timothy Morgenthaler, M.D., president of the American Academy of Sleep Medicine and professor of medicine at Mayo Clinic in Rochester, Minnesota, tells BuzzFeed Life.

All day long, you are sending signals to your hypothalamus. Eating can be a signal, for instance. And light is another major signal, Morgenthaler says. When the hypothalamus receives these signals, it activates the release of hormones in your body that can make you feel hungry, sleepy, and more.

When you stay up all day and all night, though, your signaling gets completely out of whack — you’re seeing light when you shouldn’t be, and you’re eating at weird and unexpected times. That throws your cells’ circadian clocks out of sync, which makes you feel awful: “a vague sense of nausea, fatigue, lassitude, sleepiness,” Morgenthaler says.

Toxic metabolic refuse builds up in your brain. Your brain burns a TON of energy throughout the day, which results in metabolic byproducts — refuse — left behind. (Think of soot as a byproduct of a car burning gasoline for fuel, Czeisler says; it’s the same idea). Every night, your brain works to repair and restore its neurons. But it can’t do that with all the refuse in the way, Czeisler says.

Your brain legit stops functioning as well as it normally does.

You need to sleep to replenish and repair the ATP molecules back to their complex (and efficient) state. So when you don’t sleep… your brain is not being as efficient as it can be. Meaning it just won’t work as well in some big ways. For instance:

Your judgment will go out the window.

When your brain becomes less efficient burning energy, that can impact your prefrontal cortex. That’s the part of the brain responsible for good judgment and making smart decisions. When your prefrontal cortex stops working well, your ability to make smart choices and not be a totally impulsive maniac gets compromised.

So will your ability to process sensory information.

ATP breakdown also impacts your thalamus and the parietal cortex, both parts of your brain responsible for integrating sensory information, Czeisler says.

You’ll be moody as all hell.

“After just one night of lost sleep, people have moodiness problems,” Morgenthaler says. “They become crabby and not stable emotionally.”

You could suffer from a “sleep attack,” where your brain forces you to pass out in spite of your every intention not to — which can be deadly.

Throughout the day, as ATP molecules are used to burn energy, adenosine byproducts get left behind. As the adenosine levels build up, that sends a stronger and stronger signal to your brain that you need sleep. Once it hits critical mass, that can trigger a switch in your brain that forces you to fall asleep immediately and involuntarily. “It’s almost like fainting, but it’s an involuntary sleep attack,” Czeisler says.

During a boring lecture, this isn’t a big deal. But if you’re driving a car, it just takes a few seconds to veer off the road or into oncoming traffic, killing yourself or others. “These types of accidents are much more likely to have a higher fatality rate than other types of accidents,” Czeisler says. “If you’re drunk, you’re at least moving the steering wheel. But when you fall asleep, you don’t take any evasive maneuvers and you just sail right into whatever you’re about to hit.”

Even if you don’t fall asleep behind the wheel, you’re still a danger to yourself and others after pulling an all-nighter. “If you’ve been awake for 24 hours, your performance is as impaired as if you were legally drunk and had a 0.1 BAC,” Czeisler says.

And here’s a fun fact:

“Chronic sleep deprivation is more dangerous” in a number of ways than not sleeping for a night or two, Morgenthaler says. More on that another day.

37 Batshit Crazy Things People Have Done In Their Sleep

How to Stay Clearheaded after an All Nighter 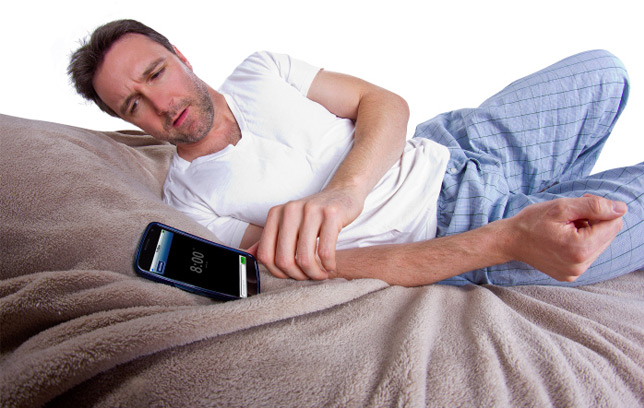 Feb 7, 2015
A new paper shows a link between teens using electronic devices in the day and having trouble sleeping at night.