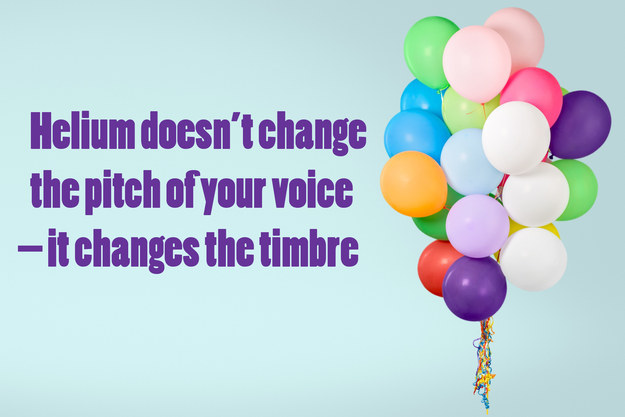 Weirdly, pitch has got nothing to do with it.

If you’ve ever inhaled helium from a balloon you’ll know it makes your voice go all weird.

Even if you’re Morgan Freeman.

BUT it’s not actually increasing the pitch of your voice, it’s changing the timbre.

Timbre is the quality of the sound. You can have two sounds that have the same pitch and loudness, but they can still sound different – that’s timbre.

The pitch is determined by the frequencies of the harmonics and these have not changed. The speech does however sound ‘like Donald Duck’. There is less power at low frequencies so the sound is thin and squeaky. This alteration to the timbre changes vowels in a spectacular way.

When you talk, some parts of your speech (at low and high frequencies) resonate, which makes them more powerful. When you speak through helium, those powerful parts are shifted to a higher part of the frequency spectrum – so you completely lose the resonance in the low frequencies.

You’ve effectively turned down the volume on the deeper parts of your voice.

The density of helium and how fast sound waves travel through it are to blame for this.

Helium is less dense than air (which is mostly nitrogen, with some oxygen thrown in). Because of this, sound waves travel almost three times faster through helium than they’d travel through air.

But before you go and test this out for yourself, you should know that inhaling helium can be dangerous.

When you inhale helium you’re depriving yourself of oxygen, so you’re at risk of suffocation.

If you decide to inhale helium from a balloon, the safest thing to do is take one small breath (it should be enough to hear the effect) and then breathe normally for at least a few minutes afterwards. It’s also best to sit down, so that if you do pass out, you won’t collapse and hurt yourself.

Never ever inhale helium from a gas cylinder – if you do it could burst your lungs and you could die from internal bleeding, which would definitely put a dampener on your party.

A Woman With Autism Has Bravely Shared A Video Of Her...