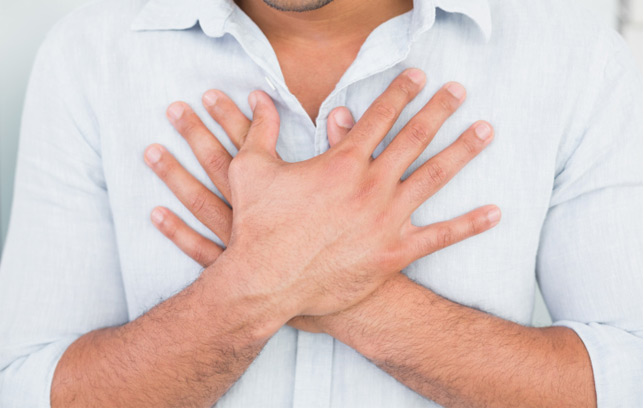 Heartburn can make your chest feel like it’s on fire. But the meds you take to control it might be doing something worse: Certain acid reflux drugs may raise your risk of a heart attack , suggests new research from Stanford University.

In the study, researchers used a technique called data-mining to analyze the medical records of nearly 3 million patients. The scientists found that people who took proton-pump inhibitors (PPIs)—common heartburn drugs available either by prescription or over the counter as Prilosec OTC and Nexium 24HR—were 16 to 19 percent more likely to have a heart attack than those who didn’t take the meds.

People under 55—a group that isn’t generally thought to be in high danger of a heart attack—were 25 to 40 percent more likely to experience one.

Previous studies have proposed a link between PPIs and heart attack in patients who already had faulty tickers, but this research expands the relationship to a more general, healthier population.

In the past, scientists believed the increased risk of heart attack in people with heart problems was due to an interaction with a common blood thinner called Plavix. Heart-attack patients take that drug to reduce their risk of clots.

In fact, in 2009, the Food and Drug Administration issued a warning that Plavix should not be taken with PPIs.

But even patients who didn’t take Plavix were at greater heart attack risk in this study, which leads the researchers to believe a different mechanism may be at play instead: PPIs can alter an enzyme called DDAH, which can reduce the levels of nitric oxide in your body, says study author Nicholas Leeper, M.D.

“Nitric oxide is now known to be one of the most important factors that affects vascular health,” Dr. Leeper says. “It’s widely accepted that having low levels of it is a bad thing, and puts you at risk of heart attack.”

So What Does This Mean for You?

It’s important to recognize that this study doesn’t prove that PPIs like Prilosec cause heart attacks. It just shows that there is an association between the two, says Men’s Health cardiology advisor P.K. Shah, M.D.

The only way to draw a cause-effect relationship would be to conduct something called a randomized clinical trial, where half of the participants would take PPIs and half would take a placebo pill. Then researchers would study the two groups to see how many heart attacks occurred in each group over a follow-up period.

And that’s what needs to be done before you pack away your Prilosec. “It would be premature to make any definitive recommendations at this time,” says Dr. Shah.

But if you’re really worried about your heart—especially if you have other risk factors like obesity, a smoking habit, or high blood pressure or cholesterol—you may want to discuss the pros and cons of the medication with your doctor, says Dr. Leeper.

You can ask your doc about switching you from PPIs to a different class of heartburn meds called H2 blockers, like Zantac.

These drugs weren’t associated with any increased risk of heart attack in the study, and they work by a different method that isn’t thought to mess with your nitric oxide. So they may be a viable alternative, Dr. Leeper says.

Oct 28, 2014
In a report published today in the Journal of the American Medical Association, researchers found that two thirds of supplements previously recalled by the Food and Drug Administration (FDA) were still tainted with prescription drugs months to years afte...