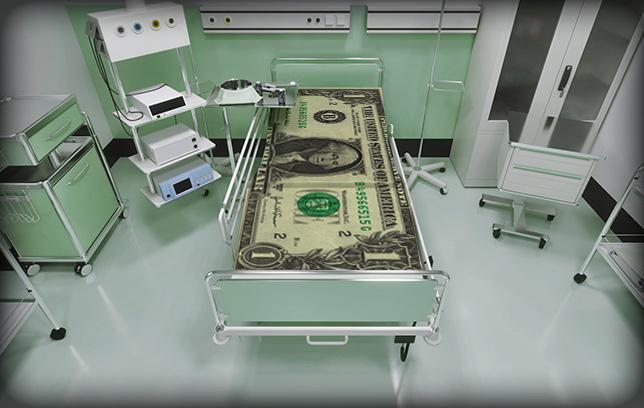 If you had to guess the priciest hospital in the country, what would it be? The Mayo Clinic? Sloan Kettering? Some renowned urban institution that’s highly ranked by U.S. News & World Report?

Nope, nope, and nope. Unless it’s your nearest emergency room, you’ve probably never heard of the facility. Same goes for most of the 50 hospitals deemed the most expensive by a new study from Johns Hopkins Bloomberg School of Public Health and Washington and Lee University.

Researchers analyzed hospitals’ public financial reports from 2012, the most recent year available. They compared the amount that hospitals charged patients to what the government considers the actual cost of providing care.

The 50 most expensive hospitals mark up their prices by an average of 1,000 percent, the researchers found. That’s compared to an average of 340 percent for all hospitals.

Why? “Because they can,” says study coauthor Gerard Anderson, Ph.D., director of the Center for Hospital Finance and Management at Johns Hopkins.

It’s nearly impossible to price shop for health care, so hospitals can basically charge whatever they want, says study coauthor Ge Bai, Ph.D., an accounting professor at Washington and Lee. (Except in Maryland and West Virginia, where the states regulate hospital pricing.)

Of course, if you have health insurance, you usually won’t have to pay the full price for your hospital stay. Especially if you’re covered by Medicare or Medicaid, in which case the markups typically won’t affect you at all, the researchers say.

If you have private health insurance, your insurance company will negotiate lower prices with in-network hospitals (and cover part of your treatment). But even so, the sky-high costs may trickle down to you by making insurance coverage more expensive to purchase, the researchers say.

And if you go to an out-of-network hospital, you may have to pay most of the marked-up price.

In fact, if you have a choice of multiple local ERs, take the time right now to find out which ones are in-network—but in a true emergency, just go to the nearest one. Your life is worth more than a few hundred bucks.

See the next page for the full list of the 50 most overpriced hospitals, as determined by the study.

How your doctors’ job satisfaction affects the care you receive

Just How Germy Are Airplanes?

Nov 14, 2014
Talk about an annoying seatmate: New research from Auburn University reveals that nasty bacteria can hang around on airplanes for days .