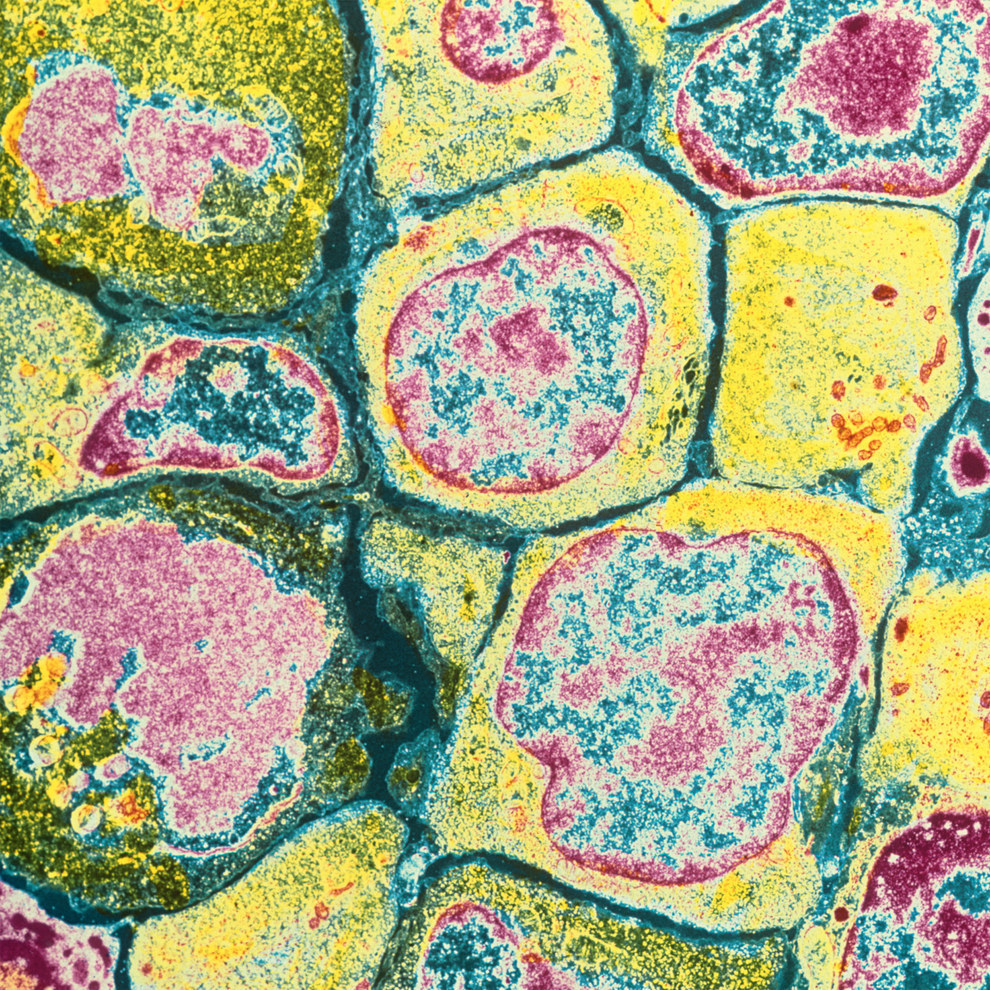 Some of these photos are artistic, others are terrifying.

Colin Salter’s new book, Science is Beautiful (Batsford, 2015), shows us some amazing images of the human body under a microscope. When the photos are colorized they look like masterpieces of art. Check them out below:

This is what bone marrow making blood looks like.

Stem cells in bone marrow divide and transform into blood cells. This process is constantly happening because blood cells don’t live for a very long time: “Red ones about 120 days, some white ones as little as three,” writes science writer Colin Salter in his book Science is Beautiful.

And these are our lung cells. “Nuclei, which contain the cell’s genetic information, appear blue. Mitochondria, which generate energy for the cell, are yellow,” writes Salter.

These are adrenaline crystals. “[Glands that produce adrenaline] are controlled by the hypothalamus, the part of the brain responsible for instinct and emotion,” writes Salter. We always have small amounts of adrenaline in our blood, but when we’re stressed we get more.

“It widens the airways of the lungs and constricts small blood vessels. This makes the muscles work harder and produces a ‘fight or flight’ response,” he wrote.

And these crystals are serotonin. Ninety percent of the serotonin in our body is found in our gut (yes our digestive system, this includes our bowels). Seratonin is often called the “happy hormone”, though it’s a lot more complicated than that. It also plays a part in memory, learning, mood, appetite and sleep.

This is a balancing stone from our inner ear. There’s a tiny stone in each of our ears that’s responsible for our sense of balance. The stones are attached to sensory hairs that are sensitive to gravity and acceleration. When we tilt our head the hairs send nerve impulses to our brain so that we can stay balanced.

These are insulin crystals. “Insulin is produced in the pancreas, and its function is to regulate blood sugar levels,” Salter wrote. If not enough insulin is produced then your blood will accumulate too much glucose which can lead to diabetes. Even if your body produces insulin correctly you can still get diabetes if your cells don’t respond to it.

This is what human skin really looks like up close. “The outer layer of the skin, the epidermis (top half of this image) consists of dead cells that are constantly sloughed off and replaced from below,” he wrote. The yellow things are a protein called keratin which makes the skin waterproof and strong, so that your organs inside don’t get damaged. The black things are hair follicles. When it gets dark, your eyes send messages to a gland that produces melatonin – a hormone linked to sleep. “In middle age, melatonin secretion drops off. This may be responsible for aging symptoms such as insomnia and irritability,” he wrote.

These are fat cells that have been emptied. Fat cells are some of the largest cells in the human body. The thick layer of fat under our skin cushions us and stores energy. In this picture, the fat deposits of the cells have been removed.

“When we put on weight, the cells swell with additional fat, and eventually extra cells are added too,” he wrote.

This is a a bacteriophage. “Bacteriophages are viruses that infect bacteria,” he wrote. The orange spider-looking thing is a bacteriophage that has just injected its viral DNA into an E. coli bacterium (the blue image).

The “legs” are syringe-like tubes that puncture the cell membrane in order to empty its DNA contents into the bacterium.

“New phages then grow, kill and depart from the host cell within 30 minutes,” he wrote.

Reprinted with permission from Science is Beautiful 2014 by Batsford, an imprint of Pavilion Books Company Limited.

Why You Should Never Pop an Ear Pimple

Why You Should Never Pop an Ear Pimple

13 Facts That Will Make You Too Aware Of Your Body

Big Pharma And A Public University Launched A Company To Cure...

May 14, 2015
GlaxoSmithKline and the University of North Carolina, Chapel Hill, have a 50-50 partnership in the new company.