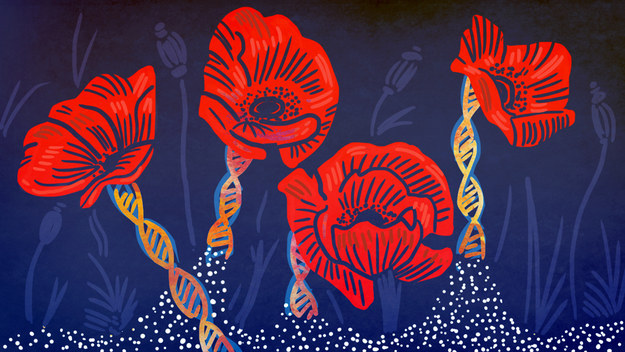 Making opiates is a long and laborious process that starts in the arid poppy fields of the Middle East. But a new method could one day allow “home brewers” to make the drugs just about anywhere, with not much more than a jar of specialized yeast.

With the tricks of genetic engineering, scientists have figured out how to turn ordinary brewers yeast into a fermentation machine that could transform sugar into our most widely prescribed painkillers, not to mention heroin. Scientists have long been working on this complex chemical process, and a crucial missing piece was published Monday in Nature Chemical Biology.

It’s the first example of a genetically engineered organism producing a narcotic, and the scientific community is split over what to think about the technology’s implications. The current method would make opiates in tiny quantities, too small to be useful for any purpose. But in two or three years, some scientists warn, this research could allow anyone with access to the special yeast strain — or the genetic know-how to make it — to cook up opiates from home.

“Things are moving really fast right now,” Kenneth Oye, a professor of political science and engineering systems at MIT, told BuzzFeed News. “It’s not like tomorrow someone’s going to have a fully integrated, one-pot pathway to go from sugar to morphine,” Oye said. “But it’s coming.”

In a commentary in Nature also published Monday, Oye argues that scientists and law enforcement need to band together to keep the new capability in the lab and out of the garage. Oye even suggests that the U.S. Controlled Substances Act be extended to cover possession of the genetically revamped yeast.

But others say that these dire warnings are overblown. They point out that a lot of good could come from this research — namely, it could lead to cheaper, more powerful, and less addictive painkillers. It would also be extremely difficult for amateur scientists to do this kind of opiate alchemy.

“At the end of this you’re left with the impression that if anyone builds this yeast, and it gets out, then anyone else can make stuff with the ease of brewing beer,” Rob Carlson, managing director of Bioeconomy Capital, a biotech investment firm, and a staunch proponent of the “DIY bio” movement, told BuzzFeed News. “But at the moment the only thing we can brew that way is beer.”

What’s more, Carlson argues, pushing for strong regulation at this early stage would only lead to the eventual creation of “bigger, blacker markets” down the line. Take insulin, for example. The widely used diabetes medication used to be laboriously extracted from pig and cow pancreases — it took more than two tons of pork to make just eight ounces of insulin. But now it’s made by genetically modified E. coli bacteria that churn out the proteins in 50,000-liter fermentor tanks.

By 2012, the market for drugs made by biological organisms hovered at an impressive $100 billion, according to a forthcoming research paper by Carlson.

The new study added to more than a decade of previous work using yeast to make opiate painkillers. The standard way of making these drugs, which relies on poppy plants from the Middle East and South Asia, is fraught with problems.

“There is supply instability that we face from changing environmental factors, and from geopolitical instability in the area,” Christina Smolke, an assistant professor of bioengineering at Stanford who has worked on opiate-producing yeast since 2004, told BuzzFeed News. Moving the process into the lab would be safer and cheaper, she said.

Previous work by Smolke had pinpointed several key ingredients — genes from the poppy plant and certain soil bacteria — that need to be added to yeast before it can turn sugar into opiates. In March, a lab at the University of Calgary contributed another piece to the chemical puzzle.

In the new study, John Dueber of the University of California, Berkeley, and his colleagues figured out the last necessary ingredient: a gene found in beets.

When fed sugar, the new yeast strain makes (S)-reticuline, a molecule that can be converted into more than 2,500 compounds that are heavily used in making all kinds of medically useful products, including cancer drugs, antibiotics, and opiates. With the new method, scientists can turn sugar into codeine, oxycodone, and morphine.

“Now we can use the power of synthetic biology to build all those molecules pretty quickly,” Dueber told BuzzFeed News.

But Dueber was also concerned about the potential for misuse, particularly for making controlled or illegal opiates such as oxycodone and heroin.

“If the field continues at the pace that it’s going, it could be done in the two-year time frame,” Dueber said. The FBI is also worried about the dawn of “home brew” heroin and other opiates.

Special Agent Edward You, head of the FBI’s Biological Countermeasures Unit, found out about the new research last year, when some scientists called him to talk about it. His team, which typically works with scientists and DIY biology labs to monitor things like pathogens and bioterror, is now on the alert for potential production of illegal drugs.

You calls it “brewing bad,” a nod to the popular TV show Breaking Bad and a forecast for how applications of the new yeast-derived opiate research could potentially go awry. From a law enforcement standpoint, he says, this research presents a clear security issue. But unlike meth labs, with this technology we have a clear window of time — at least a couple of years — to figure out how to address it.

Which is why MIT’s Oye is arguing that we need to start thinking about regulation sooner rather than later. It’s especially important given the current , Oye said. “This is a public health issue, and a big one. It’s safe to assume there would be great demand for this stuff.”

Oye’s commentary spells out several explicit recommendations for lawmakers and scientists. For example, when engineering their yeast strains, scientists should try to make them as unappealing as possible to criminals — whether that means making weaker strains that can only survive with hard-to-find nutrients, or limiting how desirable their end-products are. And companies that ship DNA to labs should screen sequences for anything suspicious, such as the poppy plant genes used to make the opiates.

Oye’s most extreme suggestion is to make the possession of these mutant yeast strains illegal.

But some argue that using law enforcement to try to put the squeeze on yeast-driven drug production is not only foolish — it could create a host of other problems.

“Everything that the DEA has published in the last 15 years about regulating meth, cocaine, and legal highs like bath salts [shows] that regulation on production and distribution of stuff that looks like this doesn’t work,” Carlson said. “We know that when you squeeze them, they ooze out between your fingers.”

Besides, banning the genetically engineered yeast isn’t likely to stop people from making it themselves, especially as the tools to alter DNA get cheaper and more accessible.

“The day will come when people will not be dependent on getting ahold of strains that make heroin, and they won’t even have to buy sequences from companies that sell them,” Greg Kaebnick, a researcher at the bioethics think tank The Hastings Center, told BuzzFeed News. “They’ll just do the work themselves.”

When parents disagree with doctors on a child’s treatment, who should have the final say?

The drugs made me do it: can prescription side-effects be an excuse for crime?

Here Are 15 Meals You Can Make In 15 Minutes